Thursday 20th of November saw 14 members of Ledbury Cricket Club travel to London to collect The West Midlands District Award from The Forty Club, an organisation formed in 1936 to share the experience of cricket from the older generation to the younger generation in cricket today. The journey lasted two and a half hours, and by 9:00pm they had arrived at London Paddington, ready for a day’s worth of sightseeing before the big day on Friday.

Friday morning saw the club representatives strolling around the sights of London, seeing attractions such as Trafalgar Square, Buckingham Palace, The Globe Theatre, and a wander around the Tate Modern to name a few; the weather was very bright throughout the day, ensuring it would be a weekend to remember. On the walk we also got a glimpse of Lord’s Cricket Ground from the outside, standing by The Grace Gates thinking it would not be long before we were living every cricketer’s dream.

As 6.00pm came The LCC XIV made their way into The Long Room bar for complimentary drinks, saw our names on the table plan, and by 7.00pm, made our way to our seats for the night. As we get to our chairs, the winning captains from each district were called in to The Long Room from the tip of Scotland all the way down to Cornwall; the LCC cohort cheering as our U15 captain Thomas Fleetwood walked into the room.

The 3-course meal was more than we could have imagined, with salmon, lamb and Frangipane barely touching the sides of our mouths as we took in the splendour of the architecture, paintings on the wall, and (only a stone’s throw away) the famous Lords square, only made visible by some dimly lit floodlights.

Upon checking the programme for the night and seeing the myriad of private and grammar schools surrounding our names, we found Ledbury Cricket Club were the only club in the entirety of The British Isles to have won an award and be represented on the night; the magnitude of which amplified how starstruck each member was. Once the dinner had concluded, we go the chance to speak to some of the members of The Forty Club and heard how impressed they were with the youth system at Ledbury CC, and how the game is being played in the right ethos there.

Once the night was over, The LCC XIV made their way back to the hotels, and sight refuge for the night, from what was most definitely an event no one member was going to forget for a very long while. The early morning saw some sightseeing for The LCC XIV, visiting Lords once again for a guided tour, as well as getting to see the changing of the guard!

It was then time for the train home, and as all members got on the train for a laugh and a long ride home, every single member still showed signs of awe from the night before, with memories that every cricketer dreams of, and now memories no LCC member will ever forget.

The Ledbury Cricket Club representatives outside The Grace Gates at Lords 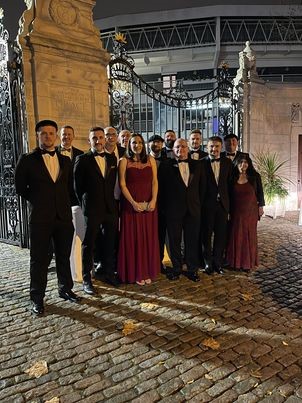